In Series 1 of The Break, we learned that Andy Chambers (Tom Palmer), edgy, sharp-tongued, late 20s, used to be something high-powered in the City but burnt himself out. For the sake of his health, Andy was advised to make a clean break with his toxic metropolitan lifestyle and came to stay in Flamford with his bluff northern uncle, Jeff Whitaker (Philip Jackson).

When Series 2 begins, Andy has been living with Jeff for a few months now, and their relationship has developed into one of edgy tolerance. Andy is now more likely to push back against Jeff’s wiles and schemes, and Jeff is less wary of pushing Andy too far.

Many of the characters we met in Series 1 will return. Corinne (Alison Steadman), Jeff’s on-off lover (mostly ‘on’) has yet to find her sense of humour. Fish Shop Frank(Mark Benton) is still frying with a smile, dishonest pensioner Mr Truepenny (Rasmus Hardiker) still has his eye out for a dodgy deal, and vicar-with-a-past, The Reverend Beverley (Shobna Gulati) is still hoping for a regular slot on “Thought for the Day”. Other returning characters will include Derek Horrox The Mayor, his close friend, Peter Humfriss, the Town Crier, and Andy’s long term ex, Liz — niece of Fish Shop Frank’s sworn rival… Frank.

City burn-out Andy returns to his uncle’s seaside home. Oddly, the town has been taken over by Brad Pitt and some Hollywood Nazis. Starring Philip Jackson, Tom Palmer and Alison Steadman.

Jeff and Andy (Philip Jackson & Tom Palmer) borrow a van from Frank (Mark Benton) setting them on the road to ruin – or rather, a nude beach, A&E and a search for some drip trays.

To win back Corinne’s heart, Jeff takes her to an escape room. But no-one expects a puzzle set by Death himself. Philip Jackson, Alison Steadman and Mark Benton star.

Episode 4 – Monday On The Beach With George, Mon 4th June

Andy helps Jeff track down a vital document. Thanks to a rapacious seagull, the quest ends in a literal cliffhanger. Philip Jackson, Tom Palmer and Shobna Gulati star.

Andy and Jeff clash with The Mayor (Rasmus Hardiker) as a missing sweet shop sets off a tale of kompromat, corruption and coastal erosion. Starring Philip Jackson and Mark Benton. 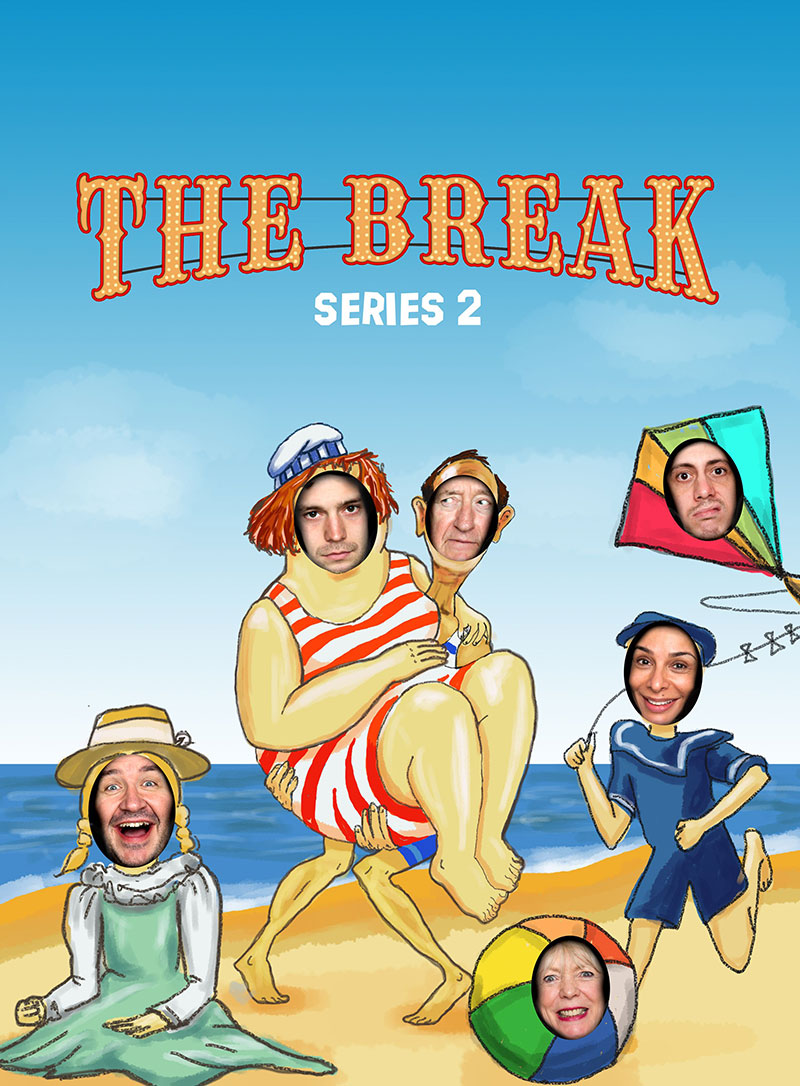 Read about series one of the Break